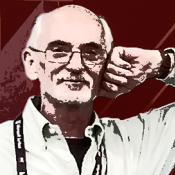 Alan Gilbertson is an independent (Scots by birth, independence is in the blood) creative director and designer living in Los Angeles, on the left coast of the U.S. Specialties are visual branding, identity programs and large format (indoor, outdoor and illuminated), across all media. His first love is book design, which he never gets tired of, closely followed by Creative Suite workflow efficiency, with which he is mildly obsessed. Besides InDesign Secrets, you can find him on graphicdesign.stackexchange.com , Behance, CreativePro.com, various Adobe forums and a sprinkling of social media sites such as LinkedIn, Twitter (@gngcreative) and Google+ (+AlanGilbertson), sharing hard-won experience with Photoshop, InDesign, Illustrator and other apps in the Adobe Creative Suite, most of which he uses (although InDesign is still his favorite).

Starting Chapter Text at a Fixed Position on the Page

Scaling an Object to an Exact Size

Sign up for the InDesign
Tip of the Week

Our guide to discovering all the
great resources on the site!